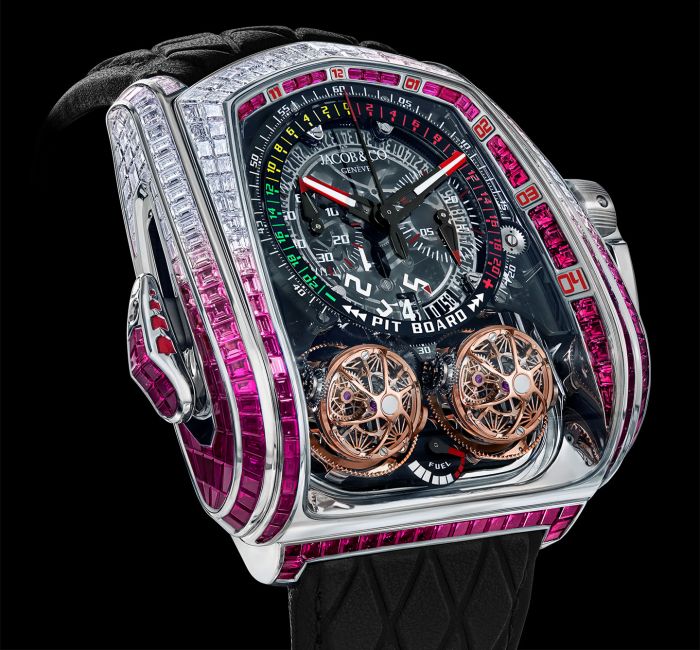 Part of the Twin Turbo's 832-component JCFM05 Manufacture Jacob & Co caliber is a decimal minute repeater - the most exotic and rarest of all chiming complications. Push the slide set into the left-hand side of the Twin Turbo Furious' highly engineered case - crafted from 18K White Gold and carbon fiber and set with diamonds and rubies -- to hear the crystal-clear sound of its cathedral gongs. 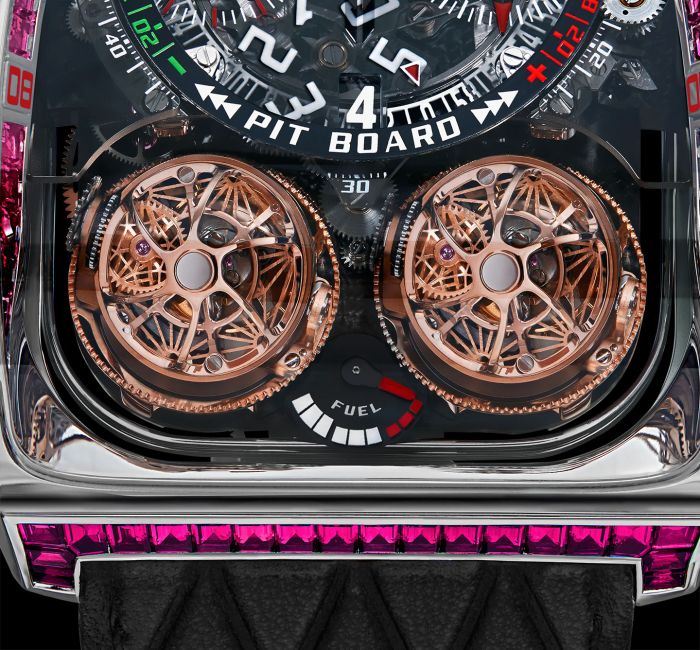 Through cutting-edge engineering design and state-of-the-art manufacturing and hand-assembly techniques, the Twin Turbo's double triple-axis tourbillons have become the very ultimate solution in tourbillon-enhanced chronometric performance. Rotating and lightning fast speeds of 24, 8 and 30 seconds along the three axes of rotation, the engineering refinement of this configuration is only superseded by its visual impact: seeing purely mechanical assemblies of such refinement in such high-speed, yet accurate motion is 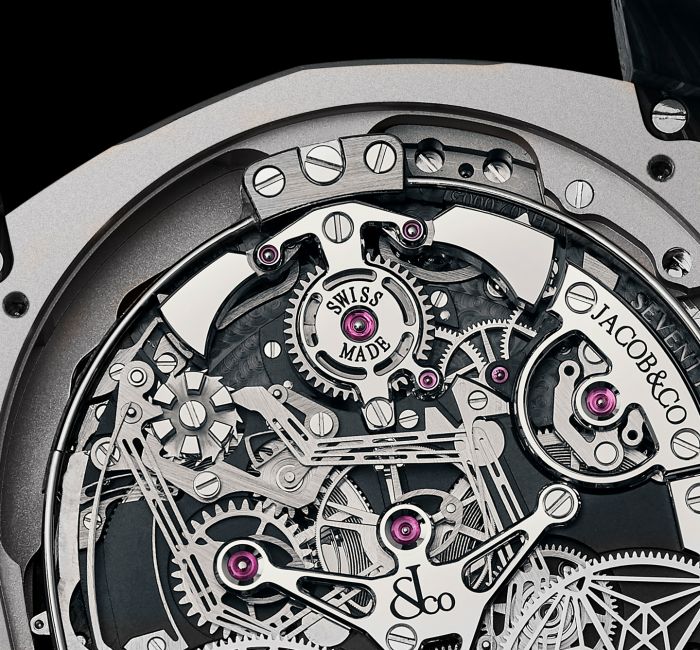 Minute repeaters are the most prized complications by collectors and they are among the most difficult complications for watchmakers to conceive. Nevertheless, Jacob & Co. sought to push the boundaries of what was considered technically feasible when bringing the Twin Turbo Furious to life. Most minute repeaters conform to the hours, quarter hours and minutes standard, but the Twin Turbo Furious chimes on demand ten-minute intervals after the hours and before the minutes, a decimal repeater that is very rare in high watchmaking. In fact, you can count the number of manufacturers presenting decimal minute repeaters on one hand and have a few fingers left. 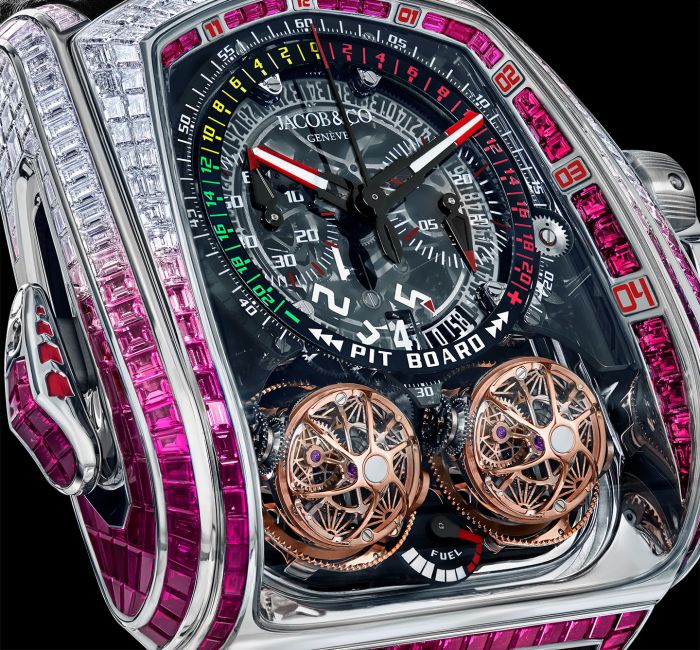 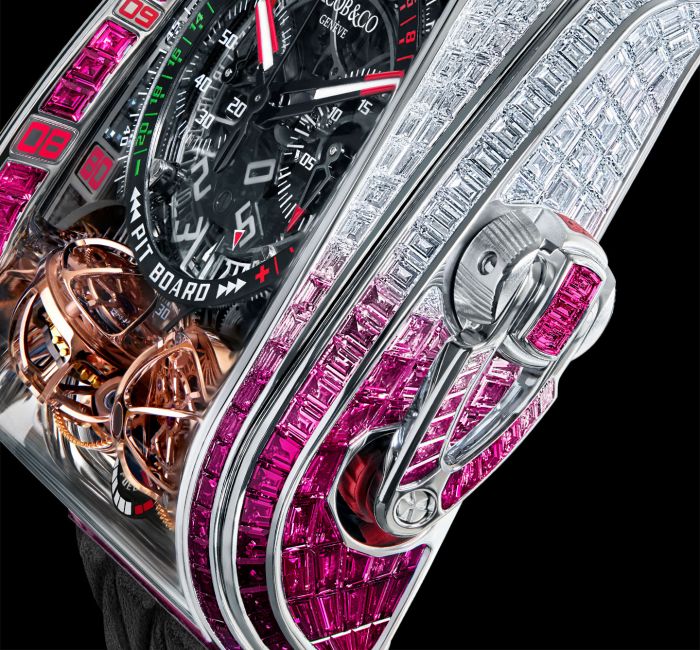 MONOPUSHER CHRONOGRAPH WITH PIT BOARD FEATURE 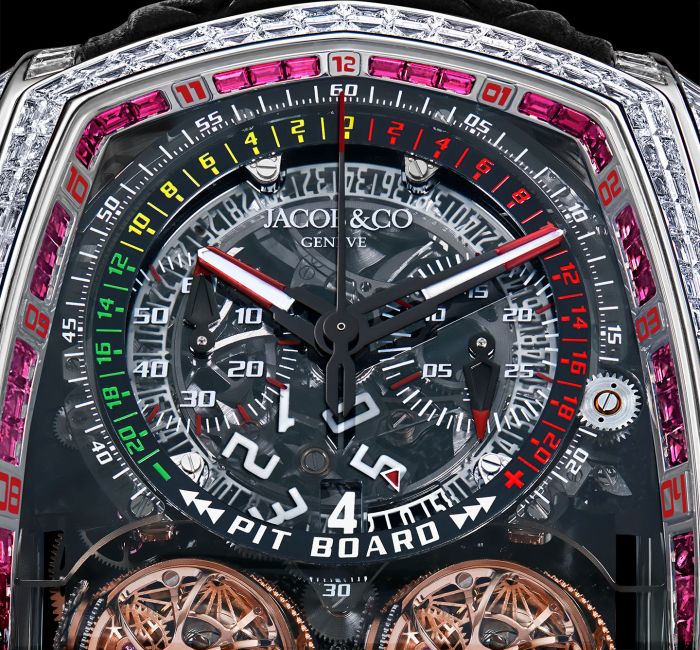 Bringing the hypercar-inspired Twin Turbo even closer to the world of the fastest automobiles is its built-in mechanical Pit Board, an easy way to compare two elapsed times. Inspired by the old-time pit boards in auto racing, you use the crank (pulled out to the first position and unfolded) to move the colored, rotating disk and central digital display to set the reference time. Then, when you operate the monopusher chronograph normally, you can easily see the difference between the current time and the reference time you set. Seconds times greater than the reference time are in the red (+) portion of the pit board, while seconds times lower than the reference time are in the yellow and green (-) portion. Unlike today's pit boards, which are electronic, this is all done mechanically. 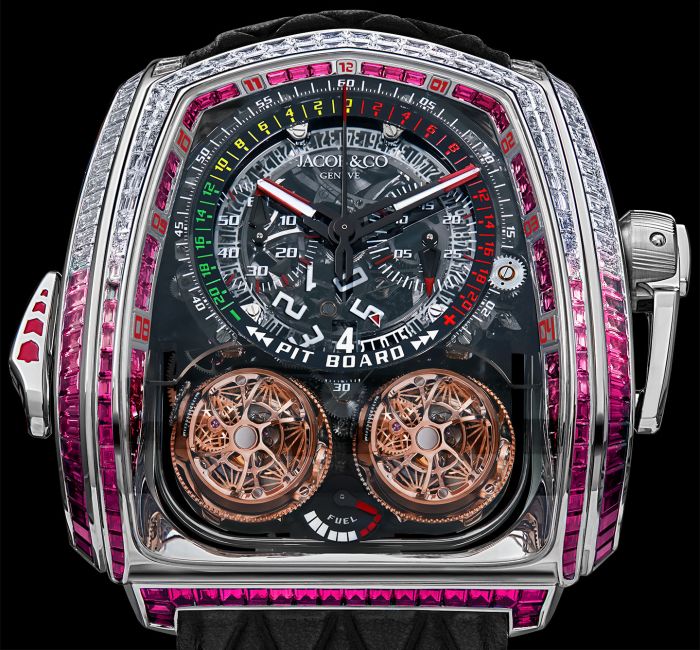 The Twin Turbo Furious Bugatti Baguette White Diamonds & Rubies is presented in an entirely unique case of outstanding visual and technical complexity, and wearing comfort that has to be personally experienced to be believed. The case measures 57mm by 52mm and is 17mm thick, including specially curved sapphire crystals on the front and the back that provide a completely unobstructed view of the exceptionally finished 832-component JCFM05 caliber. The 18K white gold and carbon fiber case alone is comprised of 88 parts. 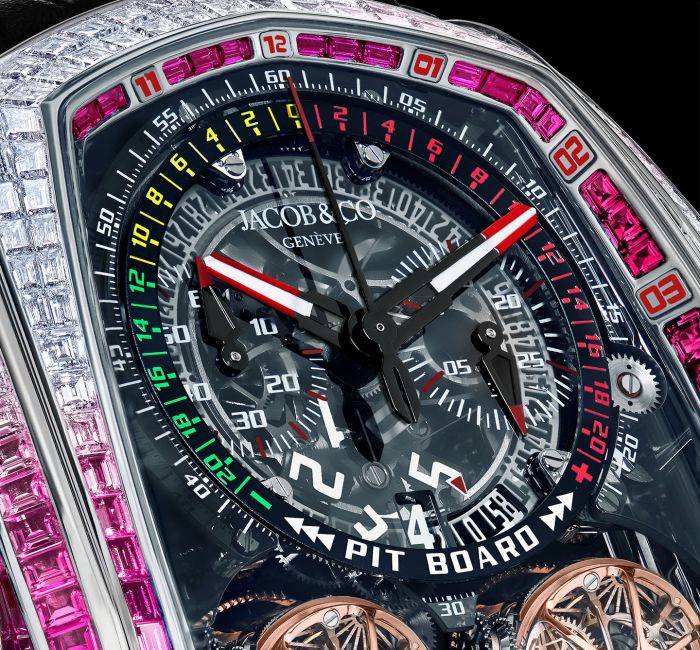 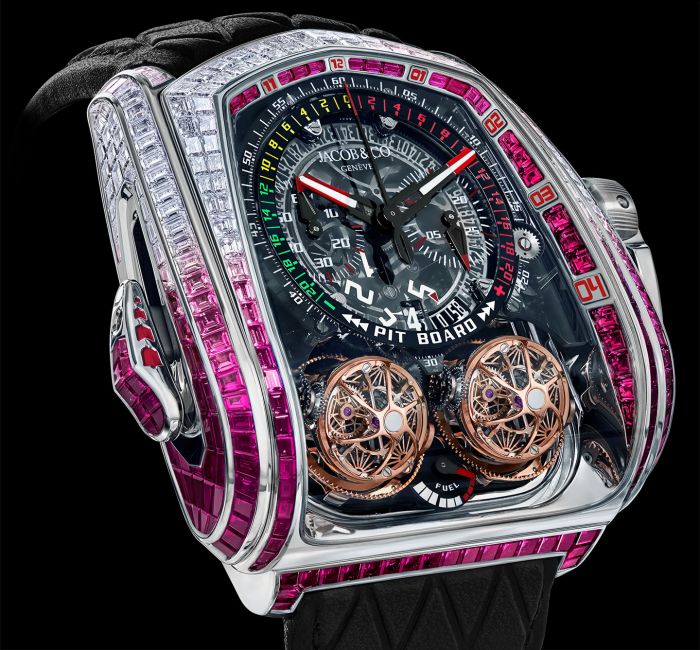 Semi-skeletonized dial showing the intricacy of the movement beneath 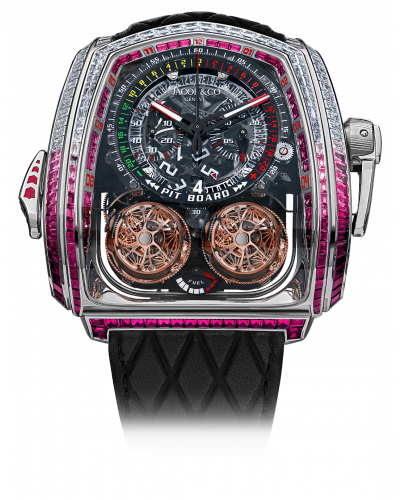