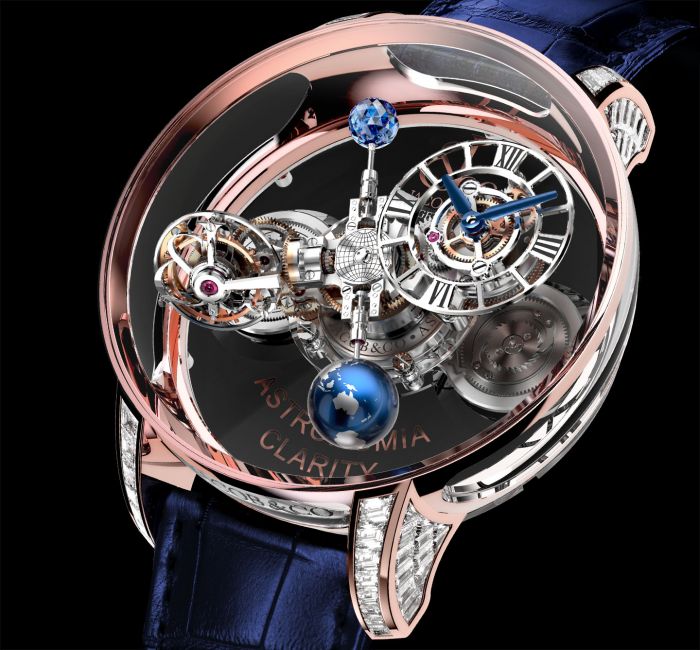 The Astronomia is the epitome of 21st century ultra-high-end watchmaking and a globally recognized symbol of Jacob & Co watchmaking expertise. A world-first both in the boldness of its unprecedented concept and its entirely mechanical construction, the Astronomia has gone beyond impressive horological achievements and has been regarded as an outstanding multidisciplinary engineering achievement.

The Astronomia Clarity is to highlight the very essence of Astronomia in the purest of ways: it presents this unparalleled cinematic sculpture by the unrestricted use of sapphire crystals - including across the entire case-back - while keeping the original Astronomia's iconic 18K gold case frame. Its four-armed movement rotates and floats through this sapphire-bound space, finished and painstakingly refined to be admired from every angle. Full of singular watchmaking solutions and adorned with the finest haute horlogerie finishing techniques, the Astronomia Clarity has earned its reputation as an inimitable icon in the field of haute horlogerie. 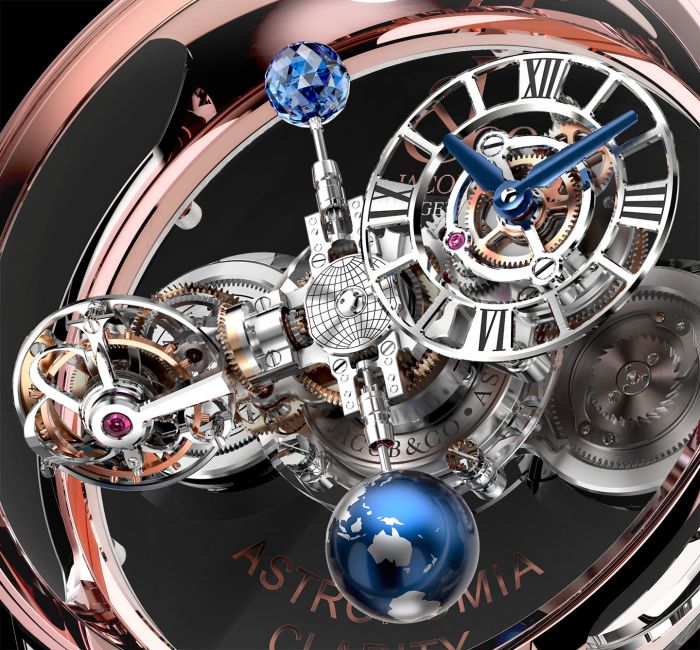 The four arms of the Astronomia Clarity carry the triple-axis tourbillon timekeeping organ of the watch, the magnesium globe in hand-painted blue for a spectacular representation of Planet Earth, the exclusive Jacob-Cut® 1-carat diamond with 288 facets, and the differential-leveled, skeletonized time display. This four-arm assembly completes a rotation around the center of the watch in 10 minutes, surrounded by anti-reflective-treated sapphire crystal apertures all around. Another astounding feature of the Astronomia Clarity is how each pair of opposing arms are perfectly calculated counterweights of one another - a testament to peerless materials engineering and watch movement design. By having equal weights on these opposing arms, its axles are relieved from strain and increased pull, as the movement takes up different orientations in space. 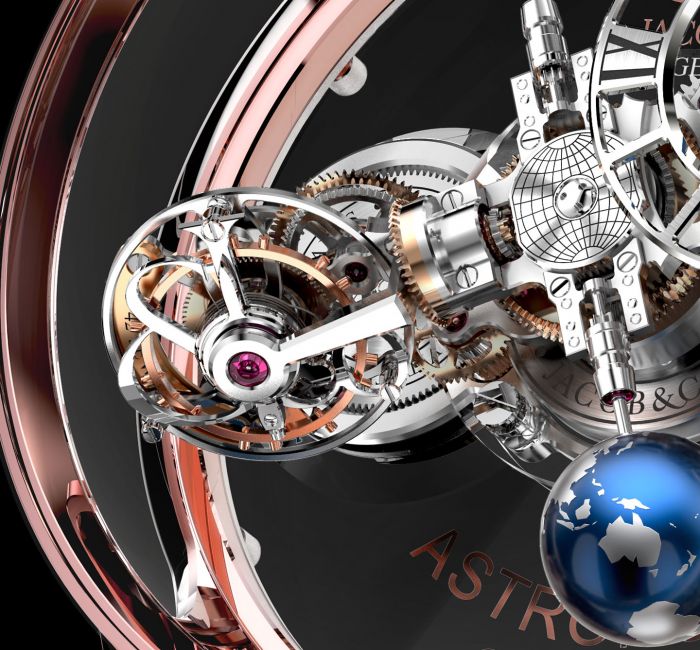 Whereas the tourbillon was originally invented to be a single-axis, rotating cage to carry the regulating organ of a mechanical pocket watch for improved timekeeping performance, the Astronomia Clarity brings this 224-year-old invention to breathtaking levels of modern refinement and complexity.

The triple-axis tourbillon of the Astronomia Clarity is at the forefront of modern watchmaking. The triple-axis tourbillon's delicately decorated cage encapsulates the balance wheel, hairspring, escape wheel and a number of other crucially important components. Characterized by this openworked cage, this outstanding tourbillon rotates on three axes simultaneously. It is a constellation of superbly finished components that, when assembled and fine-tuned expertly, allows the JCAM24 to keep accurate time throughout its 60-hour power reserve.

A full rotation on the 1st axis takes exactly 60 seconds, as a nod towards the traditional single-axis tourbillon. The 2nd axis of rotation requires 2.5 minutes to complete, while the 3rd axis of rotation is made possible by the 10-minute, four-arm rotation of the Astronomia Clarity's entire movement assembly. This makes for a bold new look at how tourbillons can function, when engineered with cutting-edge, ultra-modern technologies and timeless horological heritage in mind. 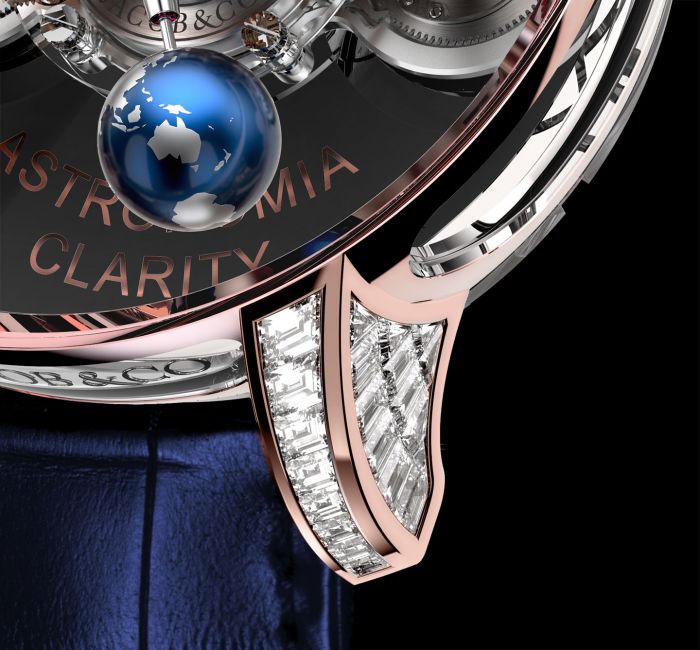 The lugs of the 18K rose gold and sapphire-case are invisibly hand-set with baguette-cut white diamonds. 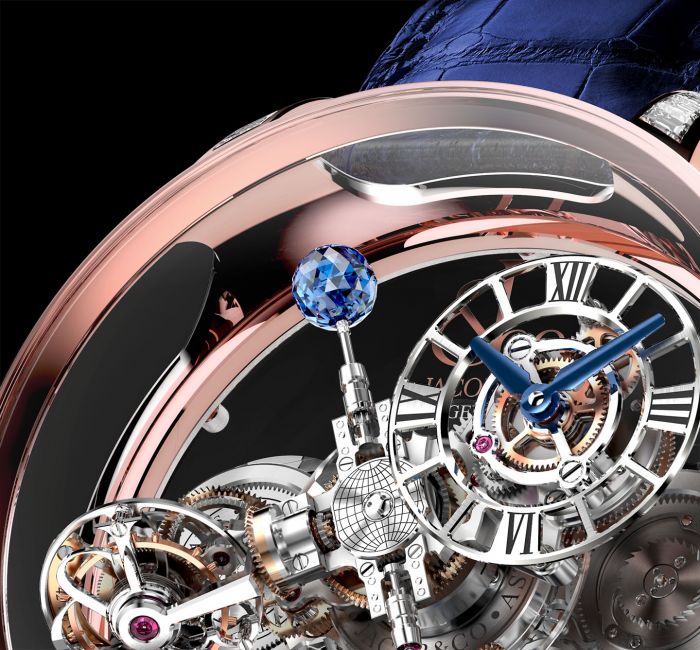 The Jacob-Cut diamond starts out as a much larger rough diamond. First, a rough diamond big enough has to be found, and the purity, clarity, and color has to be of the highest quality both inside and out, and there can be no inclusions. If they start to cut the diamond and find an inclusion, the entire piece will be ruined.

Next, the diamond is cut by machine into a round shape, close in size to the final diamond.

Then, the gem cutter shapes the stone by hand, cutting each individual facet (of 288). This has to be done slowly and carefully, as the stone has to be perfectly round and symmetrical. The danger is that the stone will become oblong and not round. To be used in the Astronomia Collection, the Jacob-cut diamond has to be completely round and weigh exactly as much as the other three satellites (time display, triple-axis tourbillon, magnesium globe).

During the process, if the gem cutter puts slightly too much pressure while adding the facets, too much of the diamond will be cut away, and the ball will end up smaller than the desired diameter. The cutting process takes at least two weeks of dedicated, painstaking work.

To make the final one-carat, Jacob-cut diamond with 288 facets, more than half of the initial rough diamond will be cut away.

The complexity of cutting the 288 facets by hand and making sure everything is symmetrical and the diamond is absolutely round, is what makes the Jacob & Co. diamond used in the Astronomia collection so special. 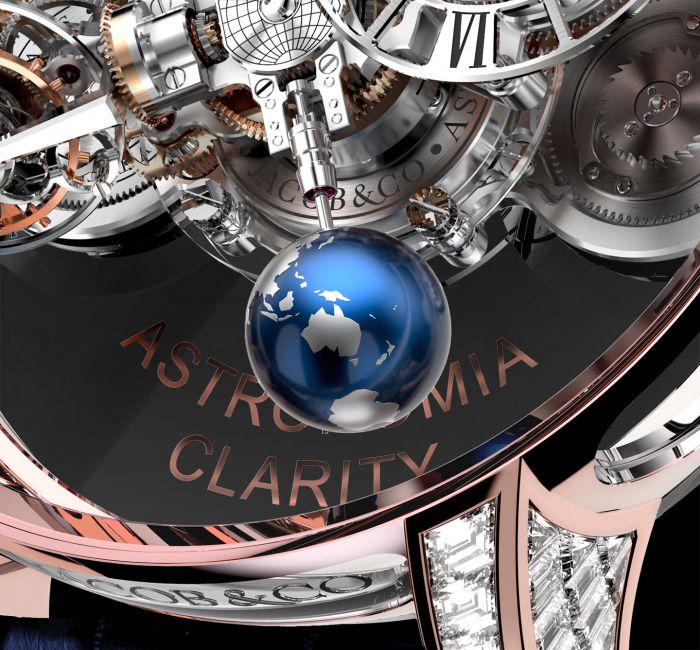 The globe is made of blue-lacquered magnesium with rose gold continents to ensure consistency in weight, as all four satellites have to weigh exactly the same. The globe rotates on itself in 30 seconds, while traveling around the dial in 10 minutes. 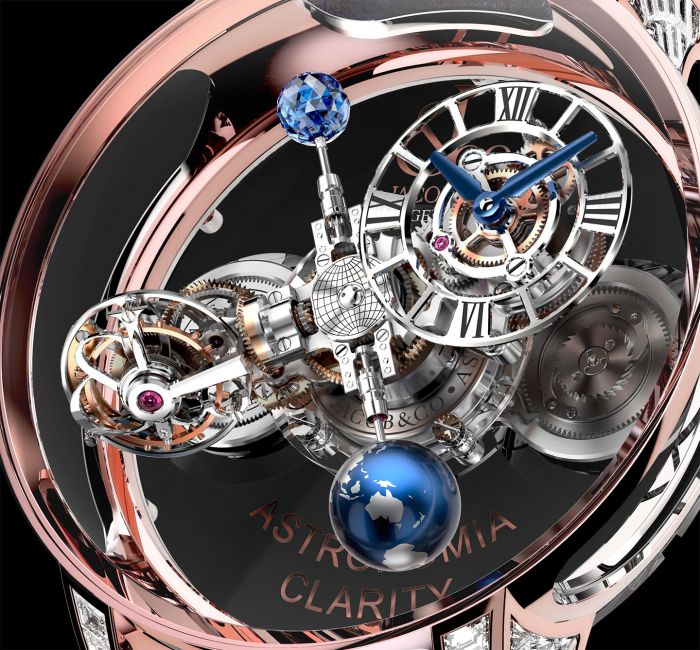 The Astronomia Clarity's case measures 50 millimeters in diameter and 25.45 millimeters thick between the highest point of its specially curved front sapphire crystal and the lowest point of its case. Crafted from 18K Rose Gold and sapphire crystal on the top sides and case back, the Clarity case adds to the viewing experience - allowing for unhindered appreciation of the spectacular caliber inside. The lugs of this special case are hand-set with baguette-cut white diamonds. 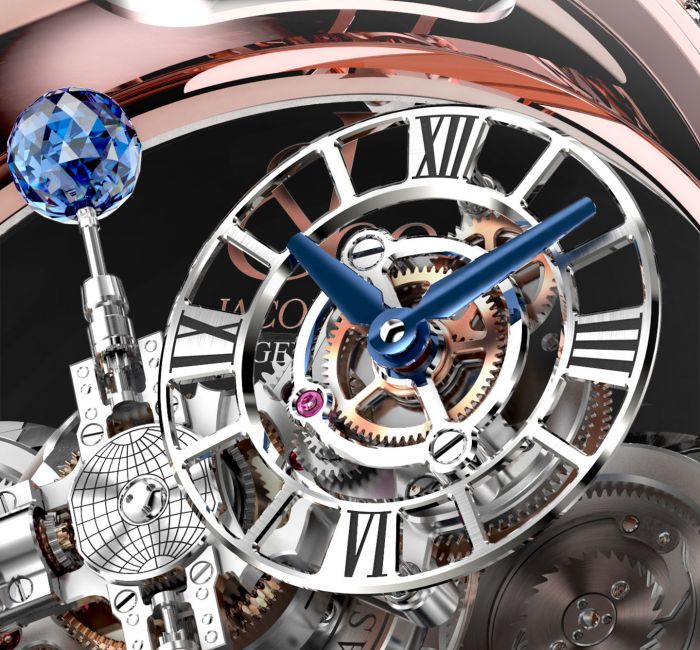 The time display sub-dial of the Astronomia Clarity is driven through an infinitesimal differential system that allows it to always remain levelled and legible as it rotates together with the movement's four-armed platform across the front of the Astronomia. The Roman numerals on the skeletonized dial are hand-engraved and filled with black lacquer, while the hand-finished hands appear in gun blue metallic. 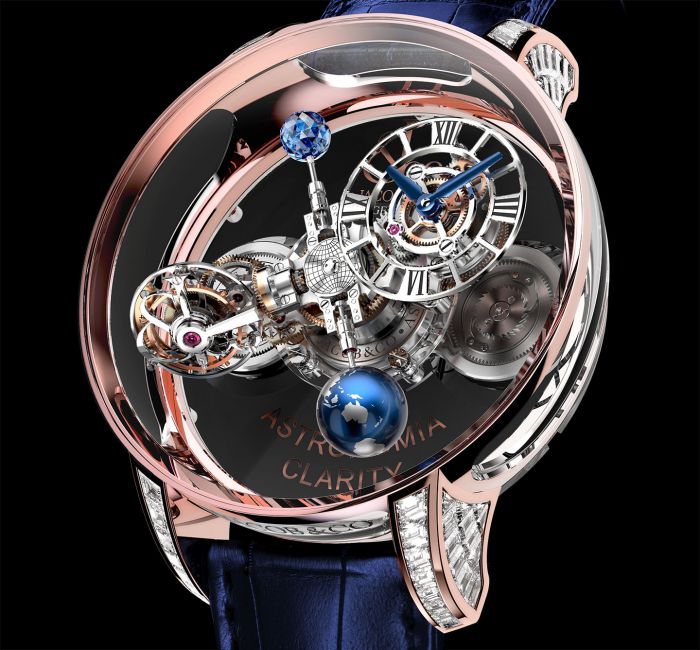 All four satellites constantly turn around the dial in 10 minutes

Unique differential always keeps the time display in the correct 12/6 orientation, no matter where it is the rotation

Unique crown-less design; winding and setting lift-out bows on the case back 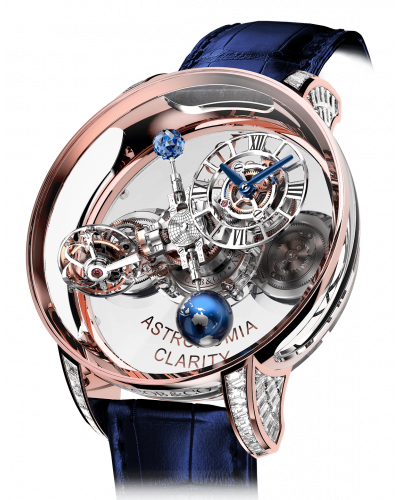